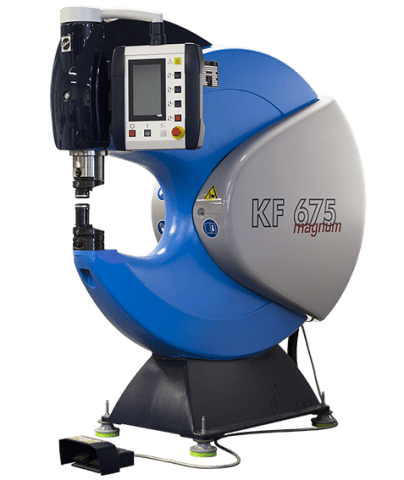 The Eckold Kraftformer KF 675 is a state-of-the-art sheet metal forming machine. It’s also the most powerful of the KF series. In all, there are 6 differently equipped models in the series, but we’re going to stick with this, the largest piece. Beyond its size, this model comes equipped with an eye-level control panel, complete with an easy-to-read LCD display. That suggests a multi-function role, with plenty of programmable overhead as well.

It’s a precision-controlled sheet metal forming machine, a piece of leading-edge tech that’s built to form flat panels of metal into all kinds of shapes. A garage that’s rebuilding old automobiles, a machine shop that’s fabricating achingly beautiful metal components, both of these places have the same thing in common, and that’s the need for this large-scale metalworking tool. Otherwise, that old car would be fitted with ugly flat panels while the machine shop would be stuck with two-dimensional sheets, too.

Just to complete the above thought, the Eckold Kraftformer KF 675 adds contoured depth and three-dimensional appeal to sheet metal sections. With shearing and cutting gear, shop workers can certainly produce attractive sheet metal parts, but they’re basically flat. The Kraftformer adds curves and form. Okay, now that this important role has been properly defined, let’s get down to business. The KF 675 provides a horizontal throat depth of 675 mm. That means its workable area will accept larger pieces, and it also means that those larger pieces can be rotated without causing ugly parts wrinkles or creases. Best of all, this is a multi-functional piece of equipment. There’s no need to switch to a planisher or doming tool, not when this Eckold machine provides, planishing, doming, flattening, shrinking, and stretching functionality.

There’s been a concerted effort to pack as many features as possible into this sheet forming equipment. The extended throat depth and tool forming assembly can process 7 gauge steel and other thick materials. Controlled by 25 different programmes, it even gives off a semi-automated vibe, although the tool operator is always under full control. Supporting that fact, the smartly designed apparatus displays all of its programmable might on a single large and legible LCD display panel.

Although compact, the C-shaped machine station seems more than large enough to go about its duties. It’s as tall as an average man, so the display is eye-level. A foot pedal is provided as well, so the adjustable stroke speed changes without the operator needing to free an occupied hand. Capable of 150 – 600 strokes per minute, the Eckold Kraftformer KF 675 seems like it can pack the jobs of a half-dozen lesser forming machines under its multi-functional hood.

For more information, click here to watch a video on the Kraftformer KF 675, visit our Eckold page or contact us directly.