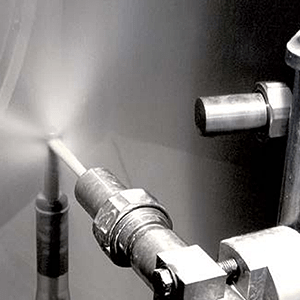 Wet blasting systems can pull off some impressive results. They discharge a controlled jet of fluid, which is paired with a suspended blasting agent so that the generated beam processes a subject workpiece until all foreign matter is ejected and the surface finish is impeccably scoured clean. Eckold PowerJet wet Blasting Systems raise the bar by generating a focused jet of homogenised liquid. This high-quality design feature matters, as you’ll soon see.

What’s the point of a complex geometrical profile if the part in question is poorly finished? That’s an important question, one that deserves intelligent consideration. Remember, perfectly engineered engines and slickly constructed machine housings are built from thousands of complex parts. They’re assembled according to high-tolerance designs so that every part snaps together and every fastener slides into place. Eckold PowerJet Wet Blasting Systems make this degree of intricate assembly an effortless task. The generated beam rounds off rough edges, it bares metal surfaces for special coatings, and it also removes tool-produced metal detritus. And, because this is a fluid-based treatment, the liquid jet also acts as a powerful flushing mechanism after all of the sharp metal shavings and greasy films have been ejected.

The Next Step in Wet Blasting Technology

Engineering control dictates form. In this case, it’s the automated equipment that allows this bleeding-edge equipment to dominate its nearest competitor. As an example of that innovative spirit, consider the aforementioned homogenic beam. The concentrated jet contains an abrasive blasting medium, yet the beam never inflicts damage on the part it’s blasting. No air input sources enter the process, so the accelerated fluid output consumes less energy than other market-leading wet blasting products. Next, the motion profile feature addresses the issue of a complex part’s architecture. The equipment uses those profiles to automate nozzle manipulation. In short, this innovative wet blasting solution is equipped with a feature-rich set of fluid-abrasive tools, most of which accept programmable instructions, as set in motion by the easy to operate control panel.

When a high-tolerance, geometrically complex component requires degreasing, the Eckold PowerJet Wet Blasting System abrades every trace of oily residue. Drill hole burrs or rough cutting edges, the fluid abrasion equipment clears the detritus with its finitely targeted beam. Those results are repeatable, controllable, and entirely programmable. Finally, a number of effective accessories, including a contaminant separating centrifuge, exist to augment the abrasion and flushing procedure. They, along with a properly mixed re-dosing medium, absolutely ensure a cost-effective wet blasting process every single time the jet is employed.

For more information, visit our Eckold page or contact us.