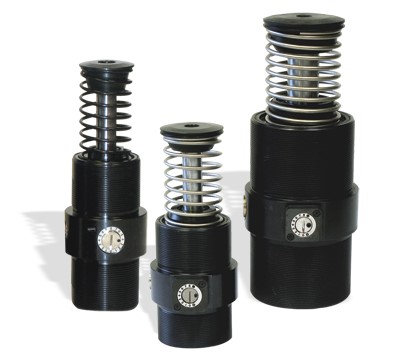 Even the finest supercomputer, equipped with all the latest digital workings, will output nonsense if it’s programmed badly. It’s the same with machinery; a bleeding-edge piece of equipment will invariably operate poorly if it’s not designed to handle a certain situation. Back with shock absorbers, with robotic gear, the machinery can cope with a known design load. However, if the forces carried or processed by the equipment are dynamic, ever-changing and mutable, then they will not fully absorb those excess energies. Without this feature in place, equipment damage is likely.

Getting down to specifics now, this post references the OEMXT and LROEMXT Series, which both incorporate low-profile adjustment knobs. Marked out in a circle around the knobs, a selectable damping force is locked in by an operator. Thanks to this feature, someone who has identified a change in a load’s energy state can fine tine the deceleration effect so that there’s no reaction from an equipment frame as the system’s processing energies fluctuate. Now, with the basic functions explained, where can these large-bore energy dampeners be installed? A grain or mine feed system can surely take advantage of this fine-tuning feature. If a seasonal variation in grain volume occurs during harvest, the employees in charge twist the dampener knob until the additional load is fluid-compensated by the threaded cylinder rod. Likewise, a high-volume mineral stream, one that’s become active because of an increase in mining extraction velocity, is offset by entering a higher value on an array of deck-supporting shock absorbers.

There’s a problem with unknown loading conditions. The grain or food or minerals are moving faster one day, slower the next, then mixed in with larger aggregate streams the day after. Conventional large bore shock absorbers cannot offset such high energies, not without the aid of an embedded control mechanism. That’s where adjustable large bore series shock absorbers, as marketed by Enidine, enter. Equipped with user-adaptive fluid dampening characteristics, the OEMXT series, among others, can dampen up to 4,000 lbs of dynamically moving material loads. Keeping the control velocity of those unwieldy loads as low as 3 in./second, that adjustable knob takes charge of heavy-duty impact scenarios.