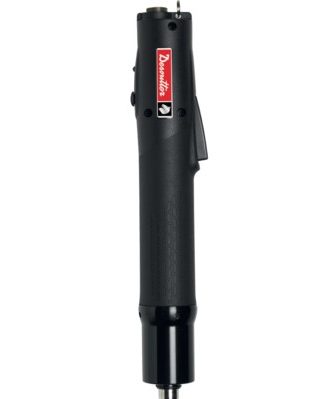 Electric screwdrivers aren’t just electrically driven, they’re also electronically governed. Nano driver electric screwdrivers, as sold by Desoutter, demonstrate the existence of this state-of-the-art technology. They’re not a product of some clever science-fiction writer’s imagination. Equipped with a transducer, a signal-to-torque converting feature, this screwdriver can fasten the smallest screws to the most brittle materials.

Capable of delivering decimal-placed torque, nano driver electric screwdrivers use advanced engineering techniques and super-miniaturised components to carry out delicate fastening operations. There’s an on-board transducer fitted inside the probe-like tool, plus an option to record torque data, so trace-ability is built into the mechanism. If an assembly process goes awry, a quick check of the tool trace-ability records will tell the maintenance engineer all he needs to know. Simply put, this low-torque, finitely controllable and programmable tool, has a great deal to offer. Having said that, what kind of applications best take advantage of this precision-imbued fastening system?

Holding the Electronics Industry Together

On a plain old test bench, electronic technicians use small screwdrivers to open equipment housings and to unfasten small circuit boards. However, those tools don’t make the grade, not in the assembly sector where micro-miniature circuit boards are being worked upon. In this sector, microscopes and clean rooms dominate. It’s here that thin wafers of circuit boards are worked upon by torque-aware screwdrivers. Using a nano screwdriver, an automated assembly system armature communicates with its host software, then it delicately fastens a series of screws until the relatively brittle circuit board is mounted.

This is a tool that can be mounted as a key part of an automation line. Alternatively, the tool’s ergonomic design also targets hand-held operation. For the fiddliest work, the jobs that take place on thin panels of plastic or glass, nano driver electric screwdrivers daintily secure the types of screws that even the most dexterous fingers would fumble. That means aerospace parts couple without producing inexcusable mounting cracks, metal mirror mounts join with fragile glass plates, and it also means the tiniest fasteners have access to an intelligent torque management system, courtesy of the inbuilt signal transducer.

Circuits and components are getting smaller, especially in areas that use solid-state electronics. We just have to open a modern cell phone to see the truth of that last statement. Keeping some of those parts in place, there are advanced adhesives. To really guarantee a properly secured part, though, manufacturers still employ screws, although these fasteners are far smaller than most. Mounting tiny, incredibly fiddly screws under microscopes, nano driver electric screwdrivers are wielded by skilled assembly line workers. Better yet, because they’re conversant in all assembly line communications protocols, these tools can also be fitted to robot arms.