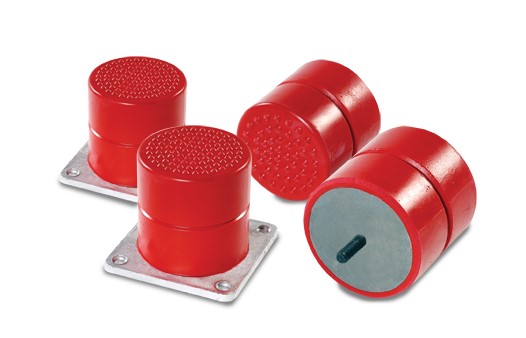 New synthetic plastics are being cooked up in advanced R&D laboratories. Tested under the most trying conditions, these advanced materials use closed or open-cell rubber matrices to handle extraordinarily heavy forces. Back at the labs, high-performance poly bumpers have taken on the best features of these two cell structures. These polyurethane-based products are basically kinetic energy sponges, which are finding their way into countless industrially tough applications.

Just to review the matter, high-performance poly bumpers are made out of a special type of expanded polyurethane foam. A mix of open and closed-cell resin has been treated so that the material exhibits a dense micro-structure, one that’s full of tiny cavities. This material is a remarkably capable kinetic energy dampener. Now, formed into bumpers and installed at key points all across a bridge crane’s operational guides, the poly bumpers function as system buffers. They decelerate the equipment after it has overcome its own inertia and the momentum imposed by the load it’s transporting.

Again, the devices are installed to absorb mechanical energy. Only, that’s not as easy a proposition as it sounds, not in a facility that transports caustic chemicals. Most polymers age and deteriorate when they’re exposed to oils and solvents. Polyurethane bumpers are immune to the effects of such corrosive compounds. Moreover, even if the industrial energies and chemical reagents stressing one of our poly bumpers should somehow damage the structure of that device, this product family is prepared for such an unlikely combination of events. With a steel-reinforced safety chain running through the synthetic rubber, the bumper holds its shape. A heavy impact or particularly corrosive chemical may, unlikely as it seems, cause the material to break away from its mount, but the metallic support will hold the buffer together until the danger passes and a replacement can be sourced.

Heavy vehicles on rail use Enidines’ industrial poly bumpers. Cranes also employ their energy buffering capabilities, too. Made from chemically-resistant polyurethane resins, the open and closed cell bumper micro-structure functions within harsh environments. Other possible applications include mining and quarrying hoppers, truck buffering zones, which employ downward-inclined loading and unloading slips, and marine docks. For those latter two applications, do remember that poly bumpers change shape when they’re exposed to heavy industrial loads. If a buffer compresses down to 25% of its original size, its diameter will then expand outwards to occupy 40% more areal space. Finally, with moving equipment types covered, let’s return to a machine shop, where hydraulic presses and cutting machines use poly bumpers as motion decelerating aids.