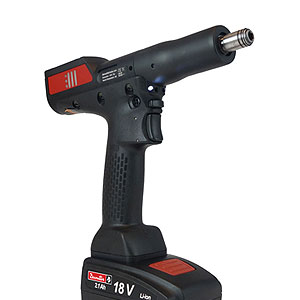 Assembly lines move at a blistering speed. The chassis of a car receives a fastener here, a body panel there, and the process moves on to the next station. In order to accommodate the accelerated workflow, the workers along the conveyors and travelling hooks need high-performing assembly tools. We’re talking about Desoutter battery assembly tools, a feature-rich, and torque capable fastener series that excels as a productivity enhancer.

Better than a basic pneumatic fastening tool, powered assembly tools take this non-stop process to the next level. The devices are handheld, equipped with powerful batteries and ergonomically designed grips, so they’re easy to wield. Utilised with a flick of the wrist, the fastening gear uses a high sensitivity clutch to ensure the assembled parts come together rapidly, correctly, and with the torque precisely applied.

This is a powered tool that operates at a blur. There’s no time to sit down on the job and take a break, not when the next car chassis or aircraft frame requires work done. The experts over at the ENKOSI management offices have recruited Desoutter battery assembly tools because of that unrelenting work pace. They’re the cordless appliances that attach body panels to automobiles, fuselage components to commercial aircraft, and even mate pump parts together so that they’re fully water-resistant.

If pneumatic assembly tools are managed via their umbilical-like hoses, then where’s the connectivity system that hosts battery assembly tools? Interestingly, Desoutter battery assembly tools are equipped with this feature. They’re designed to wirelessly connect themselves to special controllers. It’s these wireless hubs that then monitor and govern the workers’ hand operated gear. Frankly, some of the top-tier devices in this line put the older pneumatic tooling generation to shame. They’re obviously cordless and easy to manipulate. On top of that self-evident feature, the powered assembly equipment is equipped with a long-lasting lithium-ion battery, so there are no air compressor issues to worry about when this gear gets to work.

The list of productivity boosting functions and features doesn’t stop there, which is as it should be when we consider the complex parts that are scooting along the assembly conveyor today. Thousands of discrete parts go into modern cars and leading-edge aerospace assemblies. Keep that fact in mind when choosing a new battery assembly product from the ENKOSI catalogue, for these Desoutter tools apply precise amounts of torque, and that precision factor must proceed repeatably from the first fastener of the day to the last.

For more information, visit our Desoutter page or contact us.