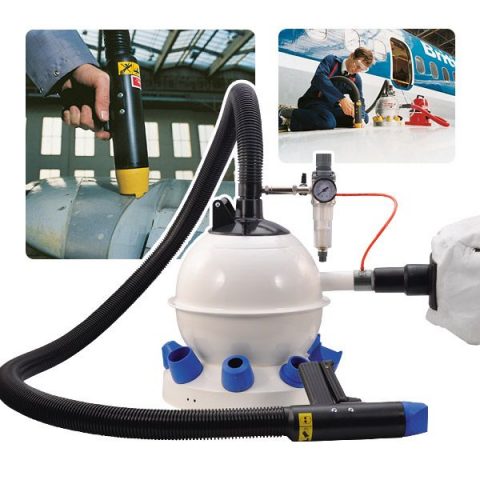 Need more information or a quote?

Initial experience gained in rust control in the automotive field with a spot blaster system has led to Redashe’s development of a specially-adapted anti-static Spotblaster to cope with aircraft corrosion. The equipment, an air-powered closed system device, is the result of close co-operation with the RAF. It can be used almost anywhere on an aircraft, even in the most inaccessible areas, such as inside wings. Precise blasting pressure control ensures that no panel damage occurs.

Every trace of corrosion is removed safely and cleanly by the Spot Blaster. It can also be used to strip paint from small areas on metal, and composite materials leaving a perfectly clean etched surface for excellent adhesion. Unlike conventional methods, spot blasting exposes weaknesses in metal surfaces where corrosion may have penetrated deeply into the metal. The Redashe Anti-Static Spotblaster uses a mixture of compressed air (from the standard workshop air supply) and blasting media, which is shot out of a long lasting tungsten carbide blasting nozzle onto the corroded part of the aircraft. A range of flexible rubber nozzles matches the surface contours to prevent dust leakage. An inbuilt air mover pulls back the used media, recycles it and any waste is taken out to a dust bag.

The anti static design use’s special hoses and earth cables to reduce the amount of potentially dangerous static electricity. This obviates the risk of explosion where flammable solvents and fuel are present. All blasting media is recycled and cleaned within the unit. Ferrous particles are removed with a magnetic separator. Fine glass beads are employed for light surface corrosion and general polishing, aluminium oxide is used for heavier intergranular corrosion on aluminium or corrosion on ferrous fasteners. MoD and Nato approved, the Redashe Anti-Static Spot Blaster is already in airline service with such operators as British Airways, Qantas and Thai Airways. Units are also extensively used by the RAF, RNAS and elsewhere. The Spotblaster is employed by several leading vintage aircraft restoration companies, the marine builders training trust, and formula one racing teams. Applications for this specialist equipment also extend to offshore oil rigs for cleaning stainless steel welds.

The Redashe Anti-Static Spotblaster represents a highly cost-effective investment in defeating the curse of corrosion and making this essential task both simple and effective.